In the works of the group exhibition Sublime Eroding, various levels of the contemporary sublime and the validity of the term were critically explored. The paradox of the sublime—beautiful and terrible at the same time—in the context of the digitalisation of today played a major role. On the one hand, the age of the Anthropocene, in which humanity itself can help shape the environment through technology, is destroying the formerly mysterious sublimity. On the other hand, new ‘sublime’ possibilities are opened up. The theme is reflected in the visual identity by a uncanny atmosphere and a drastic blend of typefaces, thereby picking up on dystopian echoes found in the artistic works. Paradoxical hierarchies also play an important role in the visual identity. The wall text is prominently displayed oversized on the ceiling of the exhibition space, while in other applications an oversized and purple human hand touches a “small” globe, scrolling its digital surface. 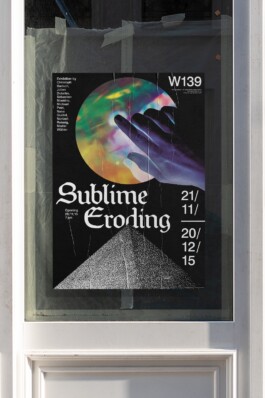 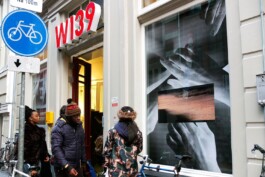