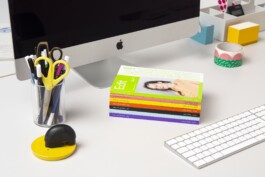 Edit, founded in Leipzig in 1993, is a literature magazine. The literary texts in the publication are accompanied by the works of visual artists. As art directors for the issues 71–77, we conceived the image section as a thematic group exhibition—like a visual narrative composed of different positions, scattered between the essays, poetry and prose. From issue 78/79 onward, we realised the artistic contributions as an independent series in order to enhance the importance of the individual contributions. In addition, each issue of the magazine conveys a specific mood, which is expressed by a quotation on its cover. Key excerpts from the texts—staged as typographic posters—form a common thread throughout the inner section. Experimental formats disrupt the overall classic text design. Other elements, such as the cover, image section and quote pages stand out through their powerful use of colour.